Next up in our Period Powerful Profiles series, we have illustrator and author Natalie Byrne. We talked to Natalie all about what motivated her to start illustrating, her new book ‘Period’ and why she thinks it’s important to challenge taboos and stigmas.

Could you tell us a bit about yourself?

What motivated you to start illustrating?

Definitely Trump and Brexit. It was a combination of being really angry with how things were going, wanting to connect with my friends who were going through a tough time and also starting CBT therapy – so I was working through my own stuff too. I’ve always been doing this since I was little, but 2017 was when I found my voice and started putting it all out there. I really wanted to help in some way but I had so little spare time. I started drawing on the train between my retail job and internships and uploading them to the gram. It felt like a small thing, but at least it was something. I never expected it to turn into what it is now.

What do you try to portray through your illustrations?

Combining colour and important issues in my simple childlike illustrative style makes it easy to approach the topics I want to discuss. I only really started to fall in love with colour after I graduated. I used to wear only black! Post graduation I began falling into a dark depression. I randomly bought a pink jumper because I loved the way it made me feel. It brightened up my day so much and made me feel so happy. That’s when I fell in love with the power of colour. I guess that’s what I want people to feel when they look at my work. I want people to know they are not alone, life is a combination of darkness and colour (is this too soppy who am I).

What motivated you to create your book ‘period’?

I went along to the #freeperiods protest back in November of last year and one of the speakers on stage said: “there isn’t even that much information about periods”. I thought there must be, it’s 2017! So, I went along to my local library and all I found were books that just mentioned that a period is a thing. I was so shocked and in complete disbelief. I went to an even bigger library but found pretty much nothing too.

For a couple of days, I went around complaining. All I kept saying was: “there really should be a book for children about periods. I mean common it’s 2017, this is madness”. After a couple of days I thought to myself, hey, am I going to just sit around and wait for someone else to make this thing? I decided to give it my best shot and I DIY print it at home. This could then be sold on Etsy. For me, if it helped just one person, I knew it would be so worth it.

I began waking up at 5 am and working on it before work, starting with researching and writing. The first couple of months it was hard to keep the motivation going. I wasn’t a doctor, so did I really have the knowledge and expertise to make this? What if I get the science wrong? What do I know? Imposter synonym started to get in the way of my motivation behind the book.

One evening, I was listening to the ‘Stuff Mum Never Told You’ podcast whilst making dinner. They did a whole episode on why Kim Kardashian promoting lollipop suppressants was SO damaging. They read out the statistic that at age 13 you’re most likely to be diagnosed with anorexia than any other age. I just stopped in my tracks and cried. I knew it was bad but I didn’t know it was that bad. At age 13 you are a child.

Age 12 is the most common age to start your period. I really believe there’s a correlation between these two things. Either the pressure to look a certain way, or just feeling completely out of control, whatever the reason these children are walking around in a lot of pain and suffering. I knew I had to get back to work.

What can people expect to find when they read ‘period’?

Expect to feel good, to learn something (no matter your age) and to have a giggle. It’s definitely got my personality all over it, so there are some jokes thrown in there. I really wanted the book to have the same energy as when you’re at a sleepover, chatting about taboo topics as a kid. The book is funny, very conversational but also pretty informative.

Why do you think it’s important to challenge period taboos and stigmas?

It’s not just important, it’s essential in the fight for equality. Put simply, the taboo around periods only exists because we live in a patriarchy. We still exist in a system that was built by men for men. The shame around periods only exists because society created it. Why do we have the tampon tax? Why is loo roll freely available everywhere and period products are not? Why do period products never include the word menstruation, blood or period? Historically and still today the people making the rules don’t experience a period. Until there is more equality, people who have periods will suffer the consequences.

What advice would you give to someone who is looking to be more open when it comes to talking about their period/menstrual health?

You have to just be brave and do it! It was really scary when I posted my first illustration about periods. I had challenged myself to draw things I found uncomfortable to talk about and my period was one of them. I was sat in the train station uploading my illustration, shaking with nerves. I was thinking, what would people think? But leaning into fear has always been very rewarding and important for me (as long as it doesn’t involve jumping out of an aeroplane).

My fear, in this case, didn’t come from what I really believed. It came from the preconceived notion from a system I grew up in. I asked myself “ok why does talking about this make me feel uncomfortable?” and the answer was because I’ve been told that it’s gross and not to talk about it.

I used what I’m good at to fight against period shame. We all have our own unique talents and skills, and we need all of them in the fight for equality. When I uploaded that first period illustration to instagram, I came across Bloody Good Period and have been helping them when I can. There are some amazing people doing some really hard work on the ground fighting the good fight. If you want to start being more open, but don’t really know what that can look like, lend your skills or time to organisations nearby that really need the extra hands. 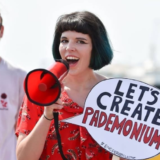 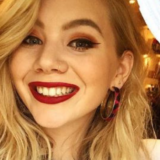